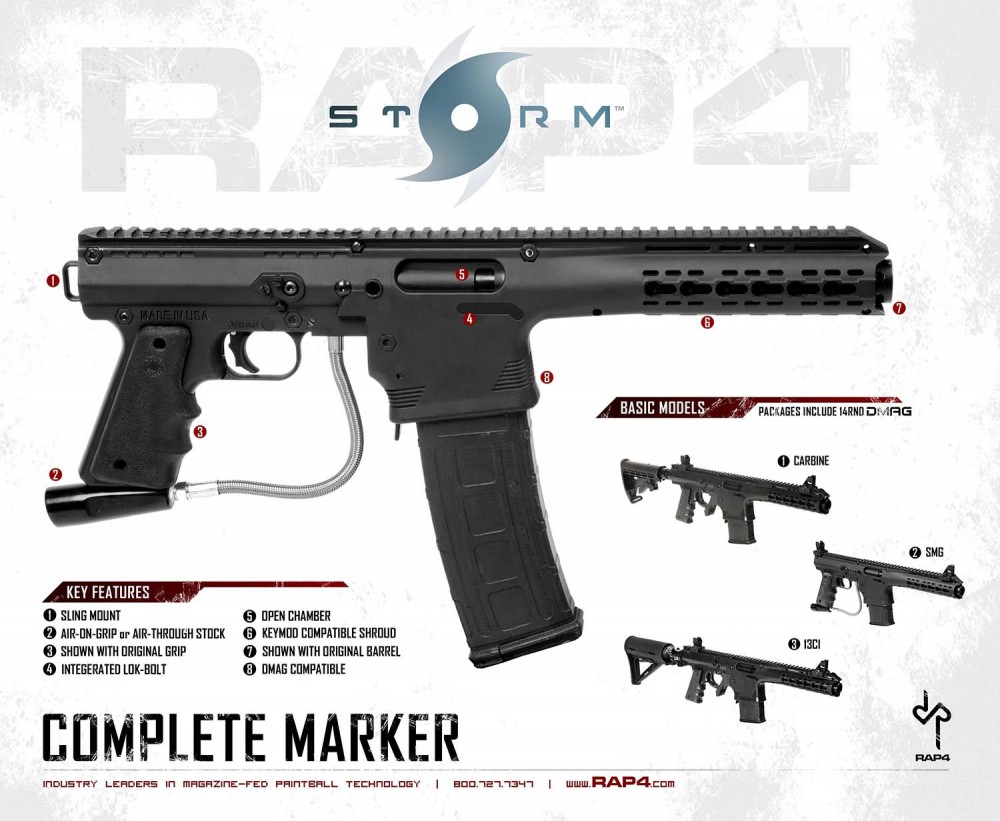 I have to admit that I am the guy that Modern Combat Solutions (AKA RAP4) is targeting with their new Tacamo MKV Storm conversion kit. Have compatible internals lying around? Check. Want something that you can tinker with constantly? Check. Upgrade options to customize to my style of play, my aesthetic stylings AND have something different? Check, check and yep, double check.

If you haven’t heard of the Storm yet, it’s essentially a shell that you can swap internals into from a list of markers giving you a  Shaped Projectile capable magazine fed marker. You can use internals from Tippmann 98’s, A5** and Phenom Classic, BT4’s, US Army markers, and even the Valken SW-1. Aside from aesthetics, by making this swap you’re essentially turning a time tested and proven marker engine and turning it into a MagFed beast. According to Modern Combat Solutions so long as your somewhat mechanically inclined the internals will drop in and operate without issue.

The one thing that’s got my attention is that this is NOT another AR-15 clone, instead looking more like a sub-machine gun in its most basic configuration. Slap a stock on there and turn it into a carbine. To me the different look is a big deal. As solid as a Tiberius T-15 or a MILSIG M17 is, they look like any other tacti-cool rifle on the market. Not knocking the design, the AR-15 design is functional, timeless and classic. Players have wanted markers for years that mimicked the AR-15 and in the last several years they have gotten them. But for me I love the oddball designs, the one-offs and the underappreciated. The Storm definitely scratches this itch, and it scratches it well. 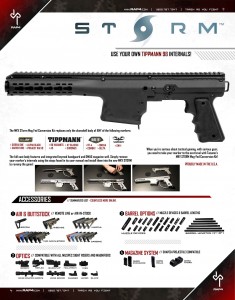 Aesthetics aside there are a myriad of upgrades available for the Storm. Want a different stock? You have dozens to choose from! Don’t like the macro line running from your marker to the bottom of your grip? The Storm allows for the Tacamo MKV Flexi-Air kit to re-route to a rear ASA where you can connect an in-tank stock or an air-thru stock (also available from Modern Combat Solutions). *

The Storm is designed around Modern Combat Solutions’ DMAG magazines, giving you the option of the economical DMAG magazines (10 for $80), the curved Helix magazines, or the shaped projectile ready DMAG magazines; each option has varying capacities available. One main draw to the standard DMAG magazines is the dual sided functionality. When you empty one side of the magazine (except the Helix magazines) simply remove it, spin it around, re-insert and you’re back to firing in less time than a full magazine swap would have taken.

The major downfall of the Storm, however, is the cost. For the Tippmann 98 conversion kit consisting of the Storm shell and a single DMAG will set a player back USD$180. When you consider that you must have an US Army marker prior to that, complete solutions from other manufacturers like Tiberius or MILSIG start to look more appealing. There is also an US Army conversion kit that comes with an additional double trigger and trigger guard for $5 more. Eventually Modern Combat Solutions will be releasing complete Storm markers, field ready right out of the box. No word yet on when to expect complete Storms to be available or for how much.

As an example here is how I would configure my Storm (using the Tippmann 98 conversion kit):
Storm Body: $180
MOE Air through Stock: $75 (in air stock w/tank starts at $160 directly from Modern Combat Solutions)
Tacamo MKV Flexi-Air Kit: $80

Now I don’t have to do those upgrades to get the marker functional. Instead I can just get the kit, a cheap stock and magazines and bring the cost down to approximately $250. I can save even more money if I don’t get a stock (or re-use a stock if the donor marker had one) and drop the cost down to ~$210 and get the marker on the field slinging paint (even less if I already have DMAGs, which I don’t). But let’s face it, I’m a gadget guy and need all the bells and whistles! And as I mentioned earlier, at these prices I don’t need to spend much more to buy a fully functional Modern Combat Solutions 468 (albeit without magazines), a MILSIG M17, or for a little more a Tiberius Arms T-15. 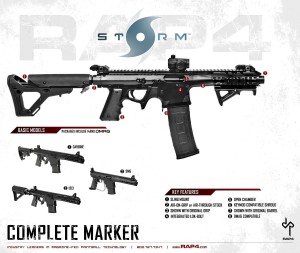 What is KeyMod? Not having run across this before I had to go and look it up. KeyMod is an open source universal interface system to allow a smaller and lighter solution for firearms accessories such as grips, flashlights and sights using a peg and hole style connector system, not unlike what you sometimes see on the back of picture frames to hang on walls.

One thing I haven’t mentioned yet is the barrel shroud, which is part of the shell. There is no way to change it for a different one without some serious hacking and welding. This alone will be a deal breaker for some, for others like myself it’s no big deal. I love the look of the shroud and how the picatinny rail on top is solid and continuous from the rear of the marker to the end of the shroud. Speaking of picatinny you’ll notice a conspicuous lack of one on the sides of the shroud or on the bottom. The storm eschews the clunky picatinny and weaver rails for a smoother KeyMod accessory system. If you have a favorite picatinny or weaver rail compatible grip you will need to purchase a KeyMod rail adapter to mount it to the Storm.

A concern I have about the shroud is just how much room is in there for barrels? Will it end up like the TiPX where you’re limited to a specific outer diameter? Or is there room enough to accommodate even the most portly of barrels? Another concern is stock compatibility, namely can I use a 98 custom/BT4 stock or do I have to use an **A5 compatible stock? As of publication date I have not been able to find definitive answers, but it is something I intend on finding out as soon as I get my kit.

The Storm isn’t going to change paintball, nor are thousands of players going to flock to the platform. But what will happen is players like myself are going to purchase the Storm and upgrades, put it together and go play paintball with a unique looking marker and hopefully have fun doing it. Heck, maybe even some old markers will get converted and get used on the field after years of neglect. Whatever the case may be check back in January when I’ll post a full out review of the Storm Kit. If there’s anything specific about the kit that you would like to know leave a comment below, on our Facebook page, or email us at contact@paintballtech.net and I will do my best to answer them in the full review.

DISCLOSURE: This article is independently published without input or influence from Modern Combat Solutions. The kit I will be receiving will be bought and paid for out of my own pocket and will be added to my personal collection of markers.

**UPDATE: 9 Oct 2015 11:54am After speaking with RAP4 the base Storm is NOT compatible directly with the A5 (the X7 is still in question). Instead, come later in November, there will be a kit called the Vortex released for A5 compatibility. This information will be re-iterated and expanded upon in the review in January.

Posted In
Gear, Markers, Parts and Upgrades, Tactical
Tags
About The Author