Put a little spring into your play 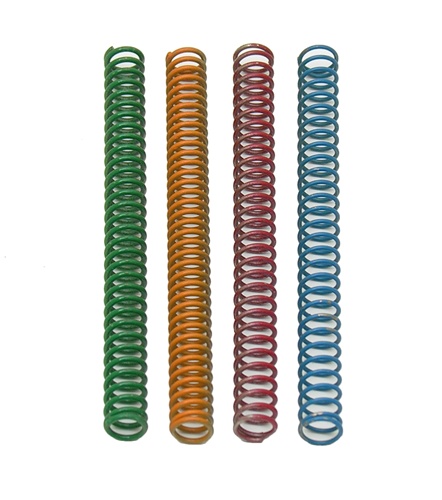 Without springs, paintball as we know it wouldn’t be possible. From trigger springs to main buffer springs, paintball markers always have at least one spring in them, usually 2, 3 or more. Especially Tippmann markers, who I swear have stock in spring suppliers with the way they build their markers.

The biggest spring in most, if not all, markers is the buffer spring. This is the spring that interacts directly with the bolt, putting tension on it to propel it either forwards or backwards, depending on the design of the marker. When the marker cycles, the buffer spring not only propels the bolt, but it also absorbs a lot of the energy released when a marker cycles in order to prevent damage to the rest of the marker when it fires.

In most markers you can purchase spring kits that contain three different springs of varying resiliency, thus providing a method of adjusting the markers firing velocity, increasing it or lowering it depending on what you want. These springs are often color coded to give players a quick visual check of which spring is high tension, mid-tension or low tension.

Common symptoms of a worn out spring are often breaking paint in the breach, inconsistent velocities, having to re-cock your marker often and/or issues with cycling overall. Unfortunately with all that is going on when a marker fires, it’s often difficult to diagnose a bad spring quickly since the symptoms can be interpreted as other issues. Thankfully, though, once you’re fairly certain your issues point to the main buffer spring it is usually easy to replace.

As I’ve mentioned before, however, I don’t like fixing things when they break. I am a fan of preventative maintenance, so I went searching and pieced together 2 milestones to plan your spring replacement.

Milestone 2: Replace your buffer spring after every paintball season

Posted In
TechShop
Tags
About The Author